Addressed exclusively to CarafeJacky Lorenzetti, owner of the 52ha estate since 2009, spoke of his conviction for sustainable viticulture and a desire to produce the best possible wine in harmony with nature.

Despite the organic practices started at the estate 10 years ago in 2012, the official conversion began in 2019. “When we arrived, we had a lot of work to do to bring the land back to life”, says the real estate investor and owner of Bordeaux estates. Château Lafon-Rochet and Château Lilian Ladouys in St-Estèphe as well as co-owner of Château d’Issan in Margaux and the Parisian rugby team Racing 92. The team started with the “most difficult soils and the most subject to diseases” and worked “step by step from there”.

“It was a belief from the start and it made sense to us,” Lorenzetti said.

2009: Acquired by the Lorenzetti family, Jacky and Françoise and their daughter Manon. Primary objective to loosen the soil and stimulate life
2010: A return to tillage while implementing competitive grassing to control excessive vigor and create a deep root network as well as stop mineral fertilization
2011: An in-depth study of 100 soil pits across the vineyard identifying 19 different soil types led to a restructuring program to better adapt the grape variety to the terroir.
2012: Start of the first organic trials on a 2ha plot of vines, one of the most difficult and complex in terms of disease pressure.
2014 : New gravity cellar installed
2015 : Double organic trials in plots that systematically pass into great wine. Biodynamic trials are also beginning thanks to the know-how of Antoine Leptit de La Bigne. Rigorous comparisons are made in the cellar between normal, organic and biodynamic viticulture,
2016: 7.5ha organic
2017: 12ha organic
2018: 24ha organic. Vines grown in organic farming more resistant to diseases and the effects of global warming
2019: The official organic conversion begins
2020-2021: Participation in the IACUSA (Impacts and accumulation of copper in agricultural soils) led by the firm Novasol Experts alongside French winegrowers concerned about the environmental impact of their practices such as Romanée-Conti, Château Latour and Palmer. Objective to measure the ecotoxicological impact of copper on the biological quality of vineyard soils using a scientific approach.
2022: Certified organic and gravity fed. New packaging to be unveiled from this vintage.

A new modern, gravity-fed chai was created in 2014 with 58 vats for specific plot micro-vinifications, varying in volume and size with 12 options between 60 and 140 hl), but Lorenzetti insists that the terroir contributes 80% to the quality of the wine. wine. A large cellar helps the work of humans to gain precision, but the vineyard is the first”.

Lorenzetti insists the goal is “not necessarily to make organic wine but to make the best wine possible”, admitting it hasn’t been easy. The average production cost has increased by 15% while the average yield loss per vintage over the past 10 years has averaged -10%.

“It has an impact of course, but we accept the difficulties because we are convinced that it is the right way forward.”

Today, 50% of the vineyard is organic and 50% biodynamic, which is still being evaluated for its impact on the vineyard and the wine. “Organic products offer us the best guarantee for the environment, but we test a little further”.

An agroecology program is also in place with the planting of trees and hedges to promote and develop biodiversity and “balance the vineyard”. Massal selection also makes it possible to preserve the most resistant grape varieties and the characteristics of successful old vine plantations. “We find that when the vineyard is balanced, you have to use even less organic products”.

When asked if the same philosophy and effort extended to other properties in the portfolio, Lorenzetti said; “We cannot believe in one vineyard and not in others”, insists that this is a “global vision which goes in stages”. 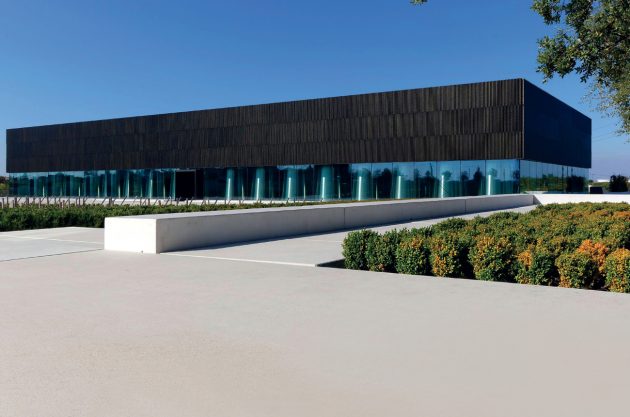 Trials began at Château d’Issan, of which Lorenzetti owns 50% alongside the Cruse family headed by Emmanuel Cruse, also director of Vignobles Cruse-Lorenzetti, in addition to Pédesclaux and Lilian Ladouys (60ha) which is currently undergoing organic conversion in reason for certification in 2024.

The group’s latest acquisition, Lafon-Rochet (45ha), was already in organic conversion when it was taken over last year (2021). Working closely with Cruse, Christophe Congé was appointed Managing Director, transitioning from his role as oenologist and head of wine operations at Château Lafite Rothschild and Château Duhart Milon for over 22 years.

There is now a collective between the four estates to share knowledge and best practices as well as a growing exchange of initiatives across Pauillac to see which viticultural methods work best and which activities are fastest and most efficient at the same time. ‘coming.

Sustainability is also essential with an energy audit carried out in each area measuring energy and water consumption. Solar panels have been listed as a potential source of future electricity generation.

To celebrate the certification there will be an overhaul of the Château Pédesclaux label concerning the bottling of the 2022 vintage with the positioning of ‘organic’ a discussion within the team.

“Customers naturally turn to the back of the label for this kind of information, but we can put it on the front, which could be a first for Bordeaux”.

Looking forward, such is the commitment to the environment, said Lorenzetti; “We are willing to sacrifice a harvest to not use chemicals. It is also our conscience”, adding “we will never go back there”.